FREE SHIPPING ON ORDERS OVER $55
We offer FREE SHIPPING on domestic orders over $55.00 (not for international orders). Add at least $55.00 of products to your Shopping Cart to qualify.
My Account
Home › The Missile Butt Plug
Strap in and go for a explosive ride with The Missile Butt Plug. With a tapered tip and smooth texture, it will rocket up your ass in no time! While it is going deep inside, you will also feel extra stimulation from the three ridges. Its flat base allows you to set it down for easy mounting and hands-free action as well.

By Robert on 10/1/2020
Love it! Very filling and enjoyable. I lube often initially to work it in.
By Santiago on 5/20/2017
I bought this thinking I could eventually work towards mastering this thing. No. My pelvis will never bend that way. Regardless, this thing is deceptively large; the specs on it don't do this plug justice. It's also pretty heavy. The only thing I don't like about it is the base -- it feels light and cheap compared to the rest of it.
Despite that, I'll just use this for stretching exercise. ...That's probably why it was made in the first place...
By Amster on 1/27/2017
The Missile is a mighty insertable, more elongated than most, and thus qualifying as an enormous ellipsoid with an elongated midsection. It features a set of three thin, equidistant rings designed to mark the insertor's progress as much as provide extra stimulation. The rings are not exactly circular, being flattened on two sides, making it briefly rectangular. Sans rings, the ellipsoid maxes out at 92 mm diameter, providing quite substantial levels of fill given how long it takes for the toy to finally taper down near the base.
This toy may not look it, but it is actually quite long, with the maximum insertable length clocking in at 205 mm. The tip is smooth enough and rounded enough for me to ignore potential perforation consequences — that's not going to happen, and thus the Missile is quite safe, unless taken out at speed, at which point the rings may become an issue, especially at first. I know, I was all too tender the first couple times I used it. This is *not* a toy to be used for dynamics of any kind. For that, I recommend the similarly-shaped Tilapia toys from TSX — the medium and the large (92 and 94 mm, respectively). Instead, this toy is all about static fill. of that, it has plenty and to spare.
The Missile has a very wide, mildly underpoured base. A small stool will help a lot — it is far easier to conquer this thing if it is elevated somewhat relative to the ground. In my case, three months or so passed between the first capture, performed in this exact fashion — and the point at which I was comfortable simply plonking it on the ground, bottoming out on it in full. This is of course due to two factors — the massive volume of this toy, and the rings. At first I wasn't a happy camper, since the rings necessitated a slowdown during exit, still leaving the tissues a bit tender. In time, as I progressed to other, larger toys, so did the experience with the Missile become milder and milder, until the rings were no longer such a shocker. Yes, this toy requires long-term patience. I now use it very often, exclusively for static play, and I enjoy it a lot more than I did at first.

By Levi on 10/25/2016
This toy has exceeded my expectations and is very enjoyable once you have worked up the ability to handle its massive girth.
By Coral on 10/10/2016
ouch this one hurt me but i like it
By Lola on 8/8/2016
Its big but if you like big than this will get the job done my husband& I bought this for vaginal play & it filled me up good with only better than half of it in gives great stretching & full sensations hopefully with a few more times of using it we will get it all the way if not owell it feels great trying & leaves hubby looking amazed while I ride it!!
Its nicely made smooth not to hard not to soft & the base holds it for hands free play no horrible smell like other toys
Great if your in to big toys

By Jake on 5/4/2016
This is a good toy. It doesn't burn my butt like some other PVC toys. Kinda wish it didn't have the ridges tho.
By Seth on 3/29/2016
I use for a warm up to larger toys...gives a nice full feeling...use lots of lube, j lube seems to work best
By Yosef on 1/24/2016
I ordered this not realizing how big it really was. And to make things worse when you sit down on it it compresses and makes it even wider. But anyway I love the size and shape and softness and yes I'm still working on it. The only thing is I wish it came in a vibrating version. That would be great .
By Jared on 1/18/2016
If you think big...this is it! Very smooth material but the size of it is....very big as described.
By santos on 1/7/2016
OMG this thing is HUGE!!!
Don't get me wrong, after getting it, and seeing it's girth, I gasped, but I was also a bit excited, (okay a lot).
The actual height is 8".
The first ring is 3 1/4".
The second and third rings are 3 5/8".
So far, and as of this post, I'v only played with it for about a week and a half and I can take the second ring, :-O
Getting to the third and then to it's taper, well it's going to take some more work.
That of which I will surely enjoy working on.
I do kind of wish it was 3" and appropriately progressive to maybe 3 3/8" on the second and third rings, scaled down by a 1/4", I think I would have been able to take it at this point.
I wish I knew of one like that????? Anybody?
By Smarty on 11/29/2015
3.5" of girth plus texture rings on this pliable plug delivers a hearty payload!
By Big Sexy on 11/12/2015
Got it and GOT IT! Base is giant. If surface is wet it's like an air hockey puck. 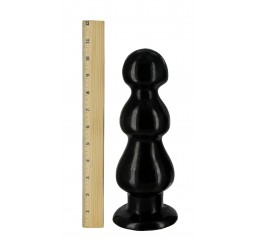 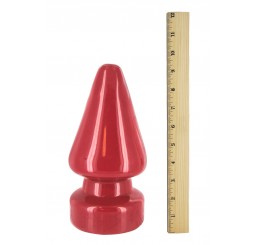 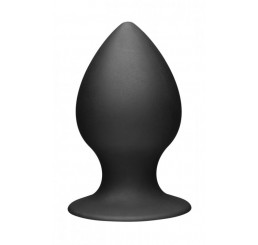 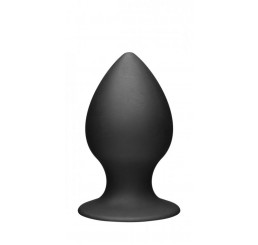 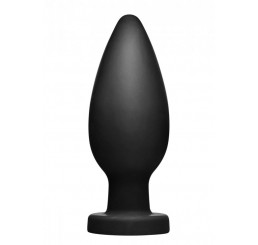 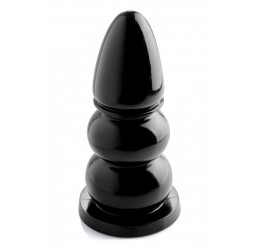 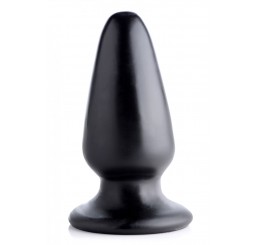 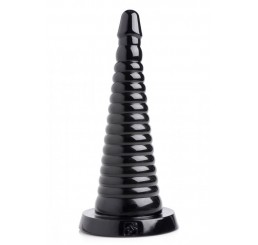